The history and development of artificial flower industry

Artificial flowers can be used to beautify homes, and can also be displayed in large hotels, exhibition halls, supermarkets, stations and other public places. It is reported that in the past 50 years, artificial flowers have formed a large-scale production in the world. In economically developed countries such as Germany, the Netherlands, and the Netherlands, the sales volume of artificial flowers is increasing year by year. In 2004, the total sales of artificial flowers in the United States were 1.75 billion U.S. dollars, an increase of 1.5 times over 10 years ago. The dried flowers produced by the Australians are as famous as the tulips produced in the Netherlands. It has been exported to more than 60 countries. It is recognized as the “fashion flower that never fades.” Singapore, which is rich in “Orchid” cattleya, has applied gilding technology to orchids ingeniously, creating a variety of shining brooches, earrings, pendants and other accessories, which are welcomed by many stars, singers, and stars. It can be seen that the commercial value of artificial flowers is extraordinary.

Looking at historical data, the Chinese folks are no stranger to the application of artificial flowers. As early as in the Tang Dynasty, Concubine Yang and her court ladies were the first to use silk flowers to decorate their hair and breasts because they had no flowers to insert in the winter. At that time, the “Picture of Hairpin Lady” painted by the painter Zhou Chou was a vivid portrayal. In modern times, domestically produced artificial flowers have developed rapidly, and a large number of products have been exported from Beijing, Shanghai, Guangzhou, Shenzhen and other places. An international tourist souvenirs and handicrafts fair held in Beijing, 71 imitation companies from all over the country participated in the exhibition. Its sales have reached the highest record in all years. 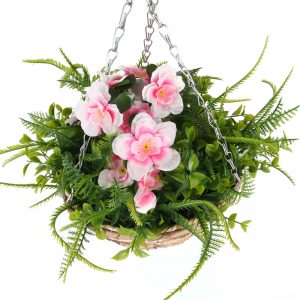